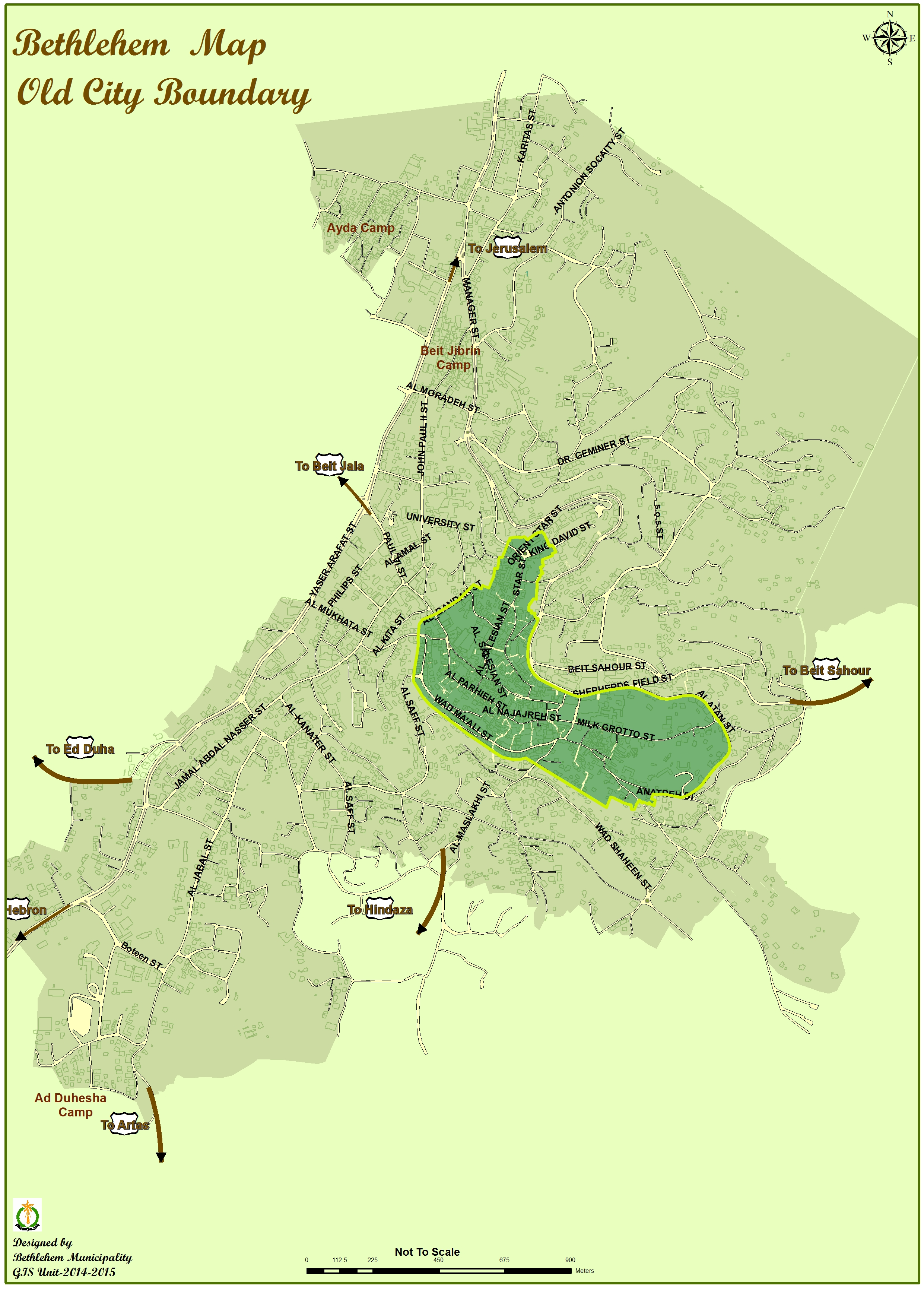 Bethlehem was mentioned around 1350 BC in the Tell al-Amarna letters, from the Egyptian governor of Palestine to the Pharaoh Amenhotep III. It was depicted as an important staging and rest stop for travelers from Syria and Palestine going to Egypt. The letters also signify that it was a border city of mid-Palestine and an outpost looking out towards the desert. The Philistines had a garrison stationed in Bethlehem because it was a strong strategic point. They entered the land of the Canaanites, mingled with its people and settled in the southern coasts between Jaffa and Gaza. The Philistines had achieved military supremacy over the greater part of the country around 1200 BC, and called it Palestine.

The narrative of the Old Testament mentions Bethlehem in the first book of the Bible when Jacob, son of Abraham, and his family were journeying to the city of Hebron passing by Bethlehem (Ephrata) (Genesis 35: 16-19). There, his wife Rachel died giving birth to Benjamin, and he buried her by the side of the Bethlehem Road where her tomb has been a shrine to this day: "And Rachel died, and was buried in the way to Ephrath, which is Bethlehem." In that time, Bethlehem was a small, walled town erected on a hill in the northern part of the present town of Bethlehem. The name of Bethlehem (Ephrata) "the fruitful" itself suggests a pastoral and agricultural life. The tale of Ruth, the Moabite, and Boaz suggests an atmosphere of idyllic rusticity that is still obvious today (Ruth 2-4). Ruth's grandson was King David of whose lineage Christ was born.

A decree of Caesar Augustus, ordering the taking of a census in all the provinces of the Roman Empire, brought Mary and Joseph to Bethlehem, thus fulfilling the prophecy of Micah, spoken 750 years before: "And thou, Bethlehem Ephrata, art a little one among the thousands of Juda: out of thee shall he come forth unto me that is to be the ruler of his people"(Mikha 5:2). When Jesus was born in Bethlehem,  Herod the Great was a vassal of Rome and in 6 AD Palestine was incorporated in the imperial province of Syria.  Emperor Hadrian in 135 AD profaned the sanctity of the Grotto of the Nativity and turned it into a pagan shrine.

From Hadrian's time until the reign of Constantine, the population worshipped Adonis in the cave where the infant Jesus was born. Palestine, consequently, was officially pagan as was the whole Roman empire until 313 when Constantine proclaimed Christianity as the religion of the state. In the year 325 the Bishop of Jerusalem, St. Maccarius, took the opportunity of acquainting the Emperor Constantine with the neglected condition of the Holy Places in his diocese. Thus, the Emperor ordered the construction, at public expense, of monumental churches to commemorate the three principal events of Jesus' life: Nativity, Crucifixion and Resurrection. One of these was a church enshrining the scene of the Nativity. Christian traditions were so clear and deeply rooted that there was no problem in locating the correct place. Among the trees, not far from the village, was a cave which the local people and their parents had known for generations to be the birthplace of Jesus Christ. The cave was made the center of a scheme for the church and work began the following year (326 AD)

Toward the end of the 4th century, Bethlehem became a very important center of monastic life. In 384 AD St. Jerome arrived from Rome with a group of pilgrims. He came to Bethlehem to continue his work in the atmosphere of monastic life. He devoted himself to the tremendous task with which Pope St. Damasus had entrusted him, namely to review all old Latin translations of the Bible and produce a new version, the Vulgate, based on original Hebrew and Greek texts. Two Roman ladies of noble origin, St. Paula and her daughter Eustochium moved to Bethlehem in 386 to lead an ascetic life along with St. Jerome. They founded the earliest monastic community in Bethlehem which has lasted, with some interruption, to this day. Paula used her riches to build a hospice for pilgrims and two monasteries, one for St. Jerome and his followers, and the other for herself and the nuns.

When the Roman empire was divided in 395 into two empires, eastern and western, Palestine was attached to Byzantium, the eastern part. In the following years the life of the Latin-speaking communities of Bethlehem faded from view, eclipsed by the growth and more spectacular austerities of an eastern monasticism. As a result, the town of Bethlehem prospered and its population increased with the spread of churches, monasteries, and convents in Bethlehem itself, and the surrounding areas.  In AD 527 Justinian became Emperor in Constantinople. Under his reign Palestine witnessed a time of prosperity and expansion for its churches and for monasticism. Afterwards, in 529, the Samaritans rebelled against the Byzantine state and overran the country, plundering and destroying as they went. Churches and monasteries, towns and villages were all pillaged or gutted by fire. The walls of Bethlehem and its main church were destroyed. The revolt was soon quelled. At the same time the church was rebuilt in a grand style. The town wall and the defenses of the monasteries were repaired.

A few years later (614) the country was invaded by the Persians. According to an oral tradition, they did not cause any damage to the Church of the Nativity because they saw the pictures of the three Magi dressed as Persians, carrying gifts to Christ at his birth. Outside and above the roof of the narthex, the gable end overlooking the atrium was decorated with a mosaic scene of the birth of Christ with his mother holding the Child to her breast. In 637, soon after his entry into Jerusalem, the Muslim Caliph 'Umar ibn al-Khattab visited Bethlehem. The relations between 'Umar and the ecclesiastical authorities were friendly and a written agreement was granted to the Patriarch Sofronious. The tolerant policy was maintained by Umar's successors till 1009. In that year a fanatic Caliph, al-Hakim, the one who had destroyed the Holy Sepulcher, declared a real persecution against Christians. However, Bethlehem was once more spared because al-Hakim wished to continue receiving the tribute Christians had been paying since Umar's day.

The conquest of Palestine by the Crusaders in the year 1099 began a new chapter in the history of Bethlehem. Within a short time the Franks took over from the local clergy and installed a community of Augustinian canons under a prior who conducted services in the Latin language. The Crusaders reconstructed the town and made it a fortified outpost. They remained for about two centuries during which the town of Bethlehem prospered. Some of them intermarried with the local people and settled down. The 12th century opened Bethlehem to European social and ecclesiastical influences to an unprecedented extent. From every country, pilgrims could now visit the Holy Places bringing with them offerings to the church and prosperity to the merchants whose shops were built in front of it. In 1100, the Crusader King Baldwin succeeded in having Pope Pascal II establish a bishopric in Bethlehem.

In 1187, Saladin the Ayyubite captured Bethlehem. Although the Church of the Nativity was unharmed, the relations with the West were abruptly cut off, and the Latin Bishop and Canons were forced to leave. The life of the local people was seriously affected by the expulsion of the Latin community and the temporary interruption of the stream of western pilgrims on which the Bethlehemites primarily depended. However, because of two treaties, one signed by emperor Frederick II and Malek el-Kamel, sultan of Egypt, and the second by the king of Navarre and the Sultan of Damascus, Bethlehem was in Christian hands from 1229 to 1244. The Canons of St. Augustine could return to their convent and the Basilica was once more opened to the Christian world.

In 1250, the Ayyubid Dynasty was replaced in Egypt by Circassian Mamlukes, and the accession of the fanatical Sultan Rukn ed-Din Beibars brought an end to the tradition of tolerance that helped safeguard the Holy places. In 1263, Beibars ordered the dismantling of the towers and walls of Bethlehem. The church itself was not damaged, which gave rise to a legend that a serpent bit the marbles and cracked them, so that the Sultan could not take them to Cairo, as he wished. However, the Christians were banished from Bethlehem.

In the following century, western influences were reinforced; monks from the order of the Franciscan Friars Minor were established in Bethlehem in the old Augustinian priory, where they still reside.  The Franciscan Fathers had acquired possession of the grotto in 1347 and also, the right to administer the Basilica and to care for its maintenance. The Franciscan Custos, Giovanni, obtained from the Sultan Qaita Bey consent to renovate the roof of the Church of the Nativity. A few years later European influences at Bethlehem were set back by the expulsion of the Catholic Latin clergy for the second time.

With the Turkish occupation in 1517, the period of conflict between the Franciscans and the Greeks for the possession of the Sanctuaries began. Consequently, the Basilica passed from the Franciscans to the Greeks according to the favor enjoyed at the Sublime Porte (Ottoman Caliph) by the nation which supported the communities (Catholics or Orthodox). Under the Turkish regime the question of ownership and rights in the Holy Places took on an increasingly political and even international dimension. The first question in the dispute between France and Russia was concerned with the possession of the key to the main doors of the Basilica. The second was concerned with the mysterious removal, one night in the year 1847, of a silver star bearing a Latin inscription, which was put into a slab of marble beneath the altar of the Nativity. However, between the 17th and 18th centuries Bethlehem was on the verge of modern times. Long and continuous contact by the local people with travelers from Western Christendom had familiarized them with the manners and tastes of Western countries, and improved their economic condition.

Palestine was under Egyptian rule for ten years beginning in 1831. However, during this period, robbery and violence were too common, and the murder of a favorite of Ibrahim Pasha in 1834, resulted in the destruction of the Moslem quarter of the town and the disarming of the whole population. By 1841 Bethlehem was again under Turkish rule. The result was unemployment, oppression, compulsory military service and heavy taxes imposed on the inhabitants. This oppressive situation forced the people of Bethlehem to emigrate abroad, especially to the Americas, to earn a living and improve their life-style. By the end of the 19th century, several European missionaries came to Bethlehem and built schools.

The Turkish rule ended in 1917, and Palestine was placed under the British Mandate. At that time, the inhabitants of Bethlehem numbered about 8000. When the British withdrew from Palestine in 1948 the population of Bethlehem was 11,696. Wars between Arabs and Jews continued and the latter occupied most of Palestine and declared their state 'Israel'. The town of Bethlehem remained unoccupied and towards the end of 1948, the union of the eastern part of Palestine and Trans-Jordan was declared under the name of the Hashemite  Kingdom of Jordan. A second war between the Arabs and Israelis broke out in 1967, and the latter occupied the remainder of Palestine including Bethlehem. Bethlehem remained under the Israeli occupation until December 22, 1995 when the Palestinian Authority took over in compliance with the Oslo Accord of 1993.

In September 1993 Israel and the PLO signed the Oslo Accord. Among its provisions, the accord called for a five-year interim period of Palestinian Autonomy in the West Bank and Gaza at the end of which the final status of the occupied territories will be decided. However, the implementation of the accord met setbacks resulting from the intransigence of the Israeli extremists.